Striking may appear to be a basic aspect of fly fishing, yet apart from casting, I find it one of the most difficult concepts for fly fishers to grasp.  When fishing upstream, it is, in my opinion, imperative to use a strike indicator.  Many fly fishers use this for the sole purpose of detecting a take, thus neglecting or not understanding its other uses.  The strike indicator should function as a multi-task tool.  It should be used to determine the depth at which the nymph will drift in the water, as a drag detector, and finally to alert the angler to possible takes.

As discussed in many previous articles on upstream nymphing, the strike indicator is, as a general rule of thumb, placed at a point one-and-a-half times the depth of the water away from the fly, but ultimately the distance is determined by factors such as water depth, current speed etc.  In other words, if the water is one foot deep, the ideal positioning of the strike indicator would be 18 inches away from the fly.  This will normally result in an almost instantaneous reaction of the indicator when the fish takes the fly. (Illustration 1)  On the other hand, if the fly and strike indicator are set too far apart, the fish may take the fly and after realizing that the fly is not the real McCoy, spit it out without the indicator even registering the take.

The strike indicator can also be set too close to the fly, resulting in the fly drifting at too shallow a depth.  The indicator may then also spook the fish when the fly approaches it, as it will be in the trout’s window of vision in such circumstances.  (Illustration 2) 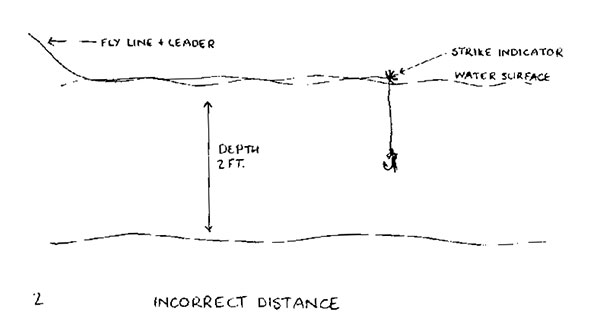 One of the more challenging aspects of achieving the correct strike is staying in close contact with the line without allowing drag to set in.  This is where drag-preventing casts and/or mending the line become important, but casting to prevent drag is not always easy.  Although one can, to a certain degree, with the use of the rod mend line to prevent drag, it is important to retrieve excess line after the mend to stay in contact with the fly.  To many fly fishermen mend once or twice during a drift, but fail to retrieve line throughout the drift.  This creates too much slack line on the water, making it difficult for the strike to result in a hook-up.

Striking quickly and correctly is a critical factor when fishing upstream.  In my opinion, it is essential not only to strike with the rod, but with the line hand as well.  I explain this to right-handed fishermen by saying, “left hand down, right hand up.” (Illustration 3) 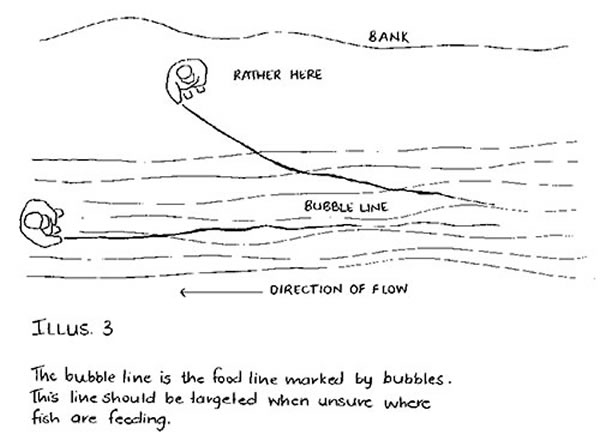 The rod hand, which is the right hand, is lifted smartly upwards in a controlled manner, while the left hand (line hand) simultaneously pulls the line downwards.  This method creates faster line speed, helps retrieve the excess line off the water, and in the end results in the water, and in the end results in less delay between the instant of detecting the take and the actual hook-up.  At all times during the course of the striking motion one’s hold on the line with the left hand should be such that you are able to release line immediately, in a controlled manner, should the fish decide to take off.  It is also more often than not mandatory to strike quickly when fishing upstream with a nymph using a strike indicator.  When the indicator registers the take, the strike should follow immediately.  Striking late usually gives the fish time to mouth the fly and spit it out before you can hook up.

Remember that fish, especially larger specimens, mostly move only short distances to reach their quarry, whether it be from side-to-side or up and down.  Smaller fish will dart around opportunistically and follow and attack small nymphs, but their older counterparts instinctively know that they will not replace energy lost by chasing every nymph that passes by.  For this reason, it is not only important to determine where big fish lie, but also to realize that when the fly is taken there may not always be dramatic effect on the strike indicator. 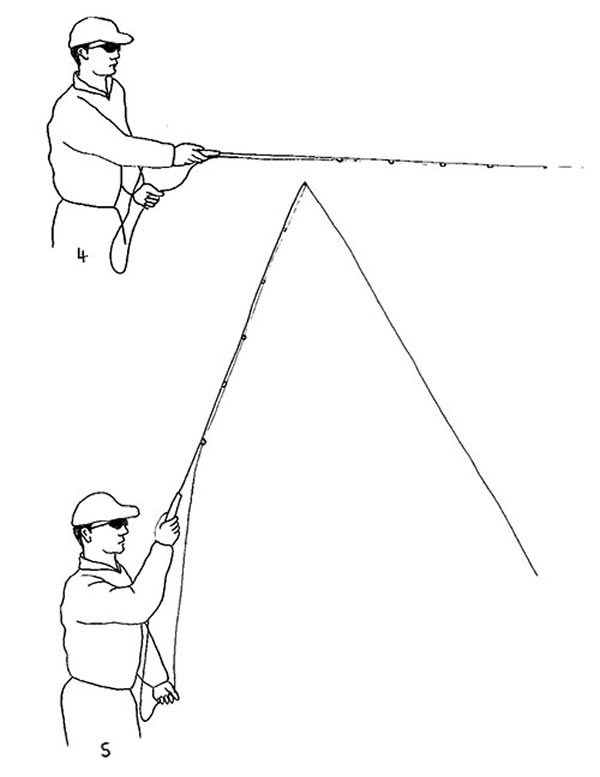 For example, a well presented nymph can drift right onto a mature fish which will move say six inches to the left or right, eat the fly and move the six inches back to its original position.  The effect on the strike indicator could be anything from a slow dip to a slight hesitation without it submerging.  Many times while guiding a client I hear, “Are you sure it was a take?” after I’ve shouted, “Yes!” for them to strike.  The golden rule when fishing a strike indicator upstream is:  When in doubt, strike!

Upstream dry fly fishing is a different ball game altogether.  Determining the take is a lot easier because the line, leader and fly can be visually observed, as well as drag setting in.  Small fish may rise to a dry fly and quite often snatch it off the surface, returning to their position in an instant.  A quick, reactive strike will not necessarily be the incorrect thing to do in this scenario.  However, the bigger the fish, the longer you need to wait before you make the strike.  An old fly fishing adage states that one only strikes after saying “God save the queen!”  This works in most cases, but you need to be aware that large fish, at times, lie and feed just below the surface, or sometimes in very shallow water.  Great care should then be taken not to strike at the wrong moment, especially when fish are sipping insects off the surface and not rising from a depth.

As a rule (particularly if a fish is visible), wait for the fish to return to a horizontal position before striking.  A big feeding fish will invariably rise slowly, eat the fly and return to its original position.  With every situation differing in some degree from the next, the angler needs to assess and determine how fast, or slowly, to strike when fishing with a dry fly.

The behavior of trout differs somewhat when feeding off the surface as opposed to subsurface.  I have noticed that, at time, trout hang onto a dry fly much longer than a nymph, allowing the angler more time to effectively hook it.  As an illustration of this, I recall guiding an American client on the Kloppershoekspruit, where a 20-inch rainbow rose more than six feet from a deep pool to take a RAB.  Watching the trout rise from this depth, the client was completely mesmerized, allowing it to return to its lie with the fly.  Realising that the client had no intention of striking, I shouted “Yes!” and feebly he lifted his rod to strike, hooking the trout.  The trout shot up the full six feet and burst through the surface, breaking the spell it had over the angler.  Had the fish taken a nymph, chances are that he would never have hooked it.

The last factor, which can have a dramatic effect on the strike, is the tippet strength versus the size (weight) of the fish.  Much can be said on this topic, but I would like to briefly mention just a few points.

Upstream fishing requires obtaining a dead-drift, with the fly being presented as naturally as possible.  This will usually necessitate using a thin diameter tippet.  The basic problem here arises when an angler hooks a fish facing upstream.  When the angler strikes, the force of the pull on the line moves it downstream, while the fish instinctively bolts upstream.  This can cause the tippet to part at the strike if the angler does not take precautions.  Smaller fish will turn or give at a strike because of their weight.  It is the larger fish that poses the problem. A method which helps prevent the tippet from breaking is to execute a short strike.  For example, if your rod is pointed between eight to ten o’clock, strike by moving your forearm up to 12 o’clock.  The biggest mistake an angler can make is to strike with the whole arm past the 12 o’clock position.  Moving your body when striking is also a bad idea, because then you have little control over the force you are exerting during the strike.  If the strike is performed correctly, the tip of the rod should act as a shock absorber, allowing the hook to set but at the same time protecting the tippet from breaking.
The first year I visited New Zealand, I had difficulty understanding why I lost so many fish at the point of strike, blaming everything except the way I struck.  When I eventually figured it out, I rarely lost a fish on the strike after that.

Striking is the link between the fish taking the fly and the angler landing the fish.  It is an action regarded by some as a natural, instinctive movement, while others battle for years to grasp the concept.  However, once properly understood and executed, you’ll land a lot more fish.