An introduction to the stillwater dead-drift techniques

A friend of mine from KZN visited for a few nights to show his new lady friend the pretty valley in which our “forgotten village” of Rhodes lies.  We had an afternoon to fish together and opted to fish stillwater and enjoy the catch-up time while driving up the pass to 2600m above sea level.  It was one of those windless midsummer days – her and there fish were lazily breaking the surface as we arrived.  We approached the water to see if we could identify what the fish were rising to but no hatch was apparent.  We leisurely kitted-up while chatting about flies and inevitably went through the “let me see your fly box” routine.  I have a serious thing against competing when fly fishing with a friend, but we, as always, had a friendly banter about what was inside our respective fly boxes. His box was something to behold – a colourful Bugger box that must have taken him hours to fill, while mine looked a little drab in comparison.  I opted to fish a floating line and he a sinker of sorts and, after deciding on flies, we strolled off towards a hot spot. We were going to fish the bank and wade to drop-offs and weedbeds, so tubes weren’t even packed.

I watched my friend fish a stone’s throw away; he is an accomplished angler and effortlessly casts a long line.  His fishing method was probably the most commonly used by Stillwater fly fishermen:  a single fly, fished with a sinking or intermediate line, allowing the line to settle as deep as possible, and then retrieving back with a quick hand-twist or down-strip retrieving action.  I often use this technique to prospect for fish, but prefer doing so in pre- and post-spawn seasons and especially during winter when most invertebrates, snails and such, are either dormant or inactive.  If trout are feeding and conditions are favourable, this method can be very effective, especially when using attractor patterns such as Woolly Buggers, Zonkers and some of the old wet fly favourites like Walker’s Killers or Mrs Simpsons.  These are undoubtedly great flies that have provided many anglers with much fun, since trout are predatory fish of the salmonid species and often find these large, stripped flies irresistible. 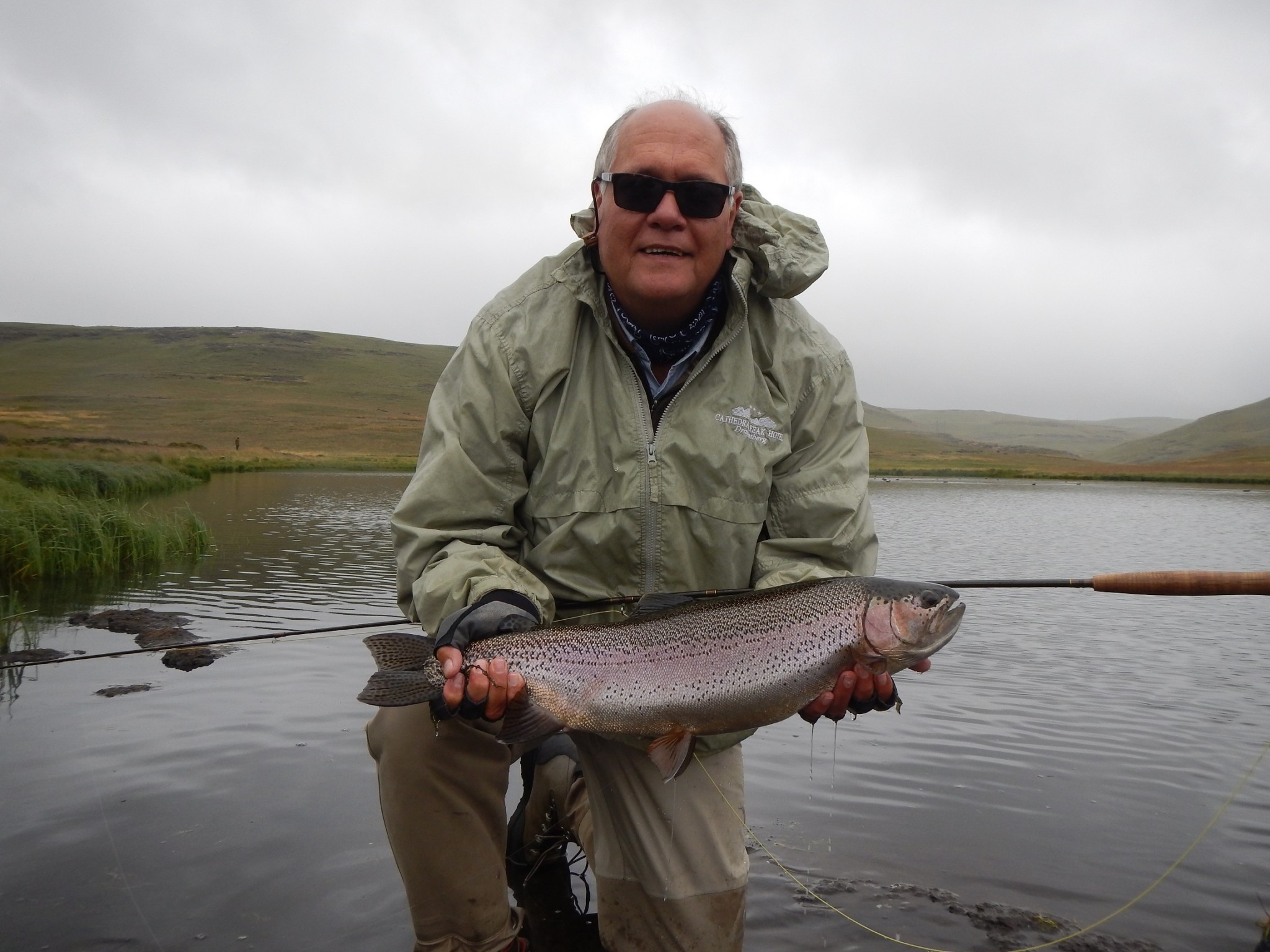 I did not feel pressured to produce fish and knew the fish in this clear water had so much food they did not have to react to moving prey, so I fished a #16 Flashback Nymph below an indicator using the dead-drift technique.  Summer is a time of plenty for trout inhabiting stillwaters with a healthy natural food supply.  Aquatic food like mayflies, midges, snails and daphnia can make up the largest part of a productive stillwater’s biomass, yet it is these imitations most anglers either choose not to fish or do not understand how to imitate.  The Stillwater dead-drift technique is not new, but maybe more a technique lost in the fast lane in which we are trapped and in an age where fast fishing (to catch the biggest and most fish) instantly gratifies.

My friend put out numerous casts, working the weedbeds, channels and drop-off, but did not attract fish.  While watching him accurately and methodically fish the correct areas, I recalled all the times I fished this technique under the same circumstances and with similar results.  It is a frustrating feeling when hours of stillwater fishing produce few or no fish.  All too often the moon or a distant thunderstorm is blamed and some anglers even complain “the fish have lockjaw”.  I know the stillwater we fished pretty well, having fished it often, so had a little home-ground advantage in knowing how deep to fish on this specific occasion.  My fly drifted or suspended without movement and I counted on fish moving within range to identify it as a potential food source )in this case, a mayfly nymph on the way up the water column to hatch), check and move to accept it.  After inhaling the fly, the fish would simply continue with its search for food without realising it had been conned.  The indicator disappeared seven or eight times during that short fishing session and I converted five into landed fish.  Admittedly, fishing was slow and unfortunately we had to leave just before the golden hour – that period is summer just before and after sunset when hatches of midges, mayflies and caddis are most prolific and fish feed in a frenzy.  As we packed away the rods, dense clouds of midges and mayflies started showing and fish moved aggressively to intercept the transforming insects on and just below the water’s surface.

Chatting to clients and other anglers, I have come to the conclusion that over-the-top technical articles on different rigs and methods to fish stillwaters often unnecessarily confuse anglers.  Many end up fishing incorrectly or simply revert back to the old trusted sinking-line-and-attractor method.  A basic understanding of trout habits in a specific environment is incredibly beneficial to ensuring a better result.  Dead-drifting in stillwaters should start as simple, uncomplicated fun fishing.  Once the technique is understood and success achieved, confidence will grow and you might never revert back to the chuck-and-strip method.

In the second part of this series, I will explain how to become a convert. 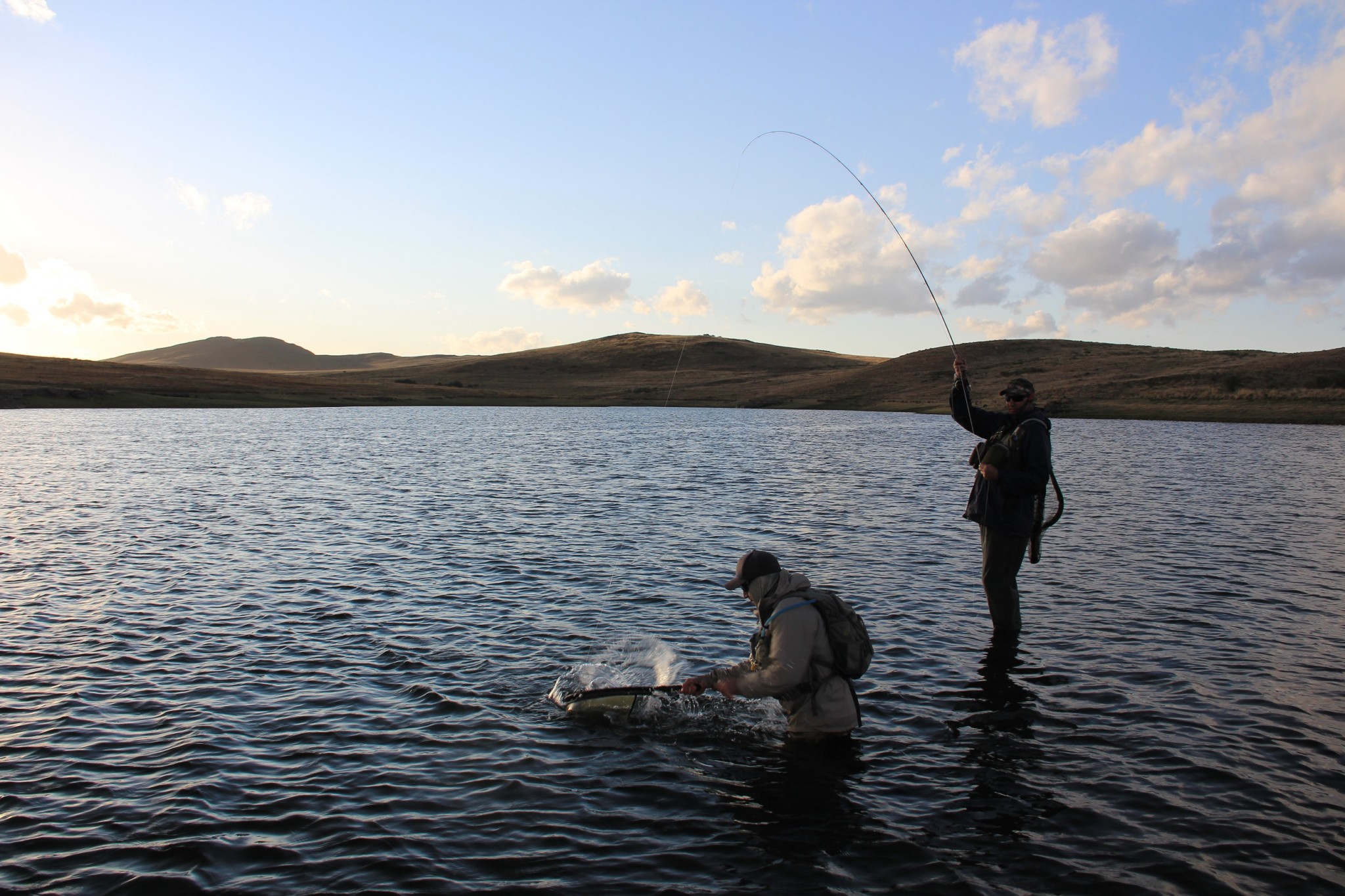